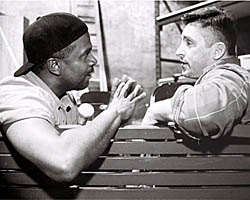 Nashville, TN, October 13th, 2008 — it's the greatest pairing of talent on a single stage in ten years. The Nashville Tennessean called the 1999 workshop of STUFF by Jim Reyland "....entertaining, fast paced and emotionally fearless. Reyland has a real play on his hands."
Ten years later, Writer's Stage reunites Barry Scott and Matthew Carlton for the long awaited world premiere of STUFF at its temporary new home in a converted warehouse at 1008 Charlotte Ave. December 4-20 at 7:30pm, Sunday matinee at 2:00pm December 14th at Writer's Stage, 1008 Charlotte Avenue next to Five Star Chrysler Plymouth.
"Friends of ours, Steve Armistead and Bill Barkley have donated a warehouse on Charlotte Ave. for this production. It's perfect in that the play takes place in an old warehouse filled with STUFF," says Reyland.
Barry Scott is one of Nashville's most enduring artists. As a writer, director and actor, Barry has created hundreds of memorable roles including "Ain't Got long," based on the life and contributions of Martin Luther King. Barry is also Artistic Director of The American Negro Playwright Theatre and will produce and hold student workshops at the new Charlotte Ave. location in 2009.
Matthew Carlton's career spans three decades, appearing in over 80 professional stage productions, ranging from musical- comedy to Shakespeare. His diverse film and television roles run the gamut from Masterpiece Theatre to America's Most Wanted.. He has received First Night and Tennie awards and was named Best Actor by the Nashville Scene. 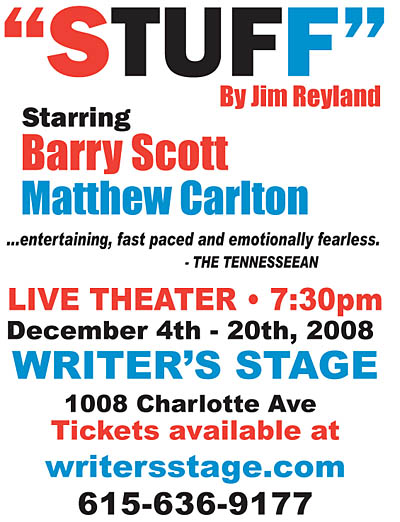